Rottweilers are such loving and loyal animals and would do just about anything to win your love. But this raises the question whether they are equally as friendly when another dog comes on the scene. If you're wondering how your Rottie will go at the dog park or with a new dog on the scene, you will find the answer to your question throughout this article.

Rottweilers are usually good with other dogs, provided they have had behavioural training and have been socialised as a puppy. Owners who do not make this a priority may find their Rottweiler is wary, intolerant or even aggressive towards other dogs, particularly if they are male and not desexed.

Below is a deeper look into why Rottweilers can go either way when interacting with other dogs. I have also outlined a few ways you can increase the likelihood that your Rottweiler will be sociable.

Are Rottweilers Good with Other Dogs?

Rottweilers are good with other dogs when they have been trained and socialised. This training and socialisation needs to occur between the ages of 3 and 16 weeks, when a Rottweiler is most impressionable.

Without proper socialisation, your Rottweiler will not become familiar with other dogs. As a result, they may display aggressive or antisocial behaviour. This is mainly because Rottweilers are incredibly loyal and protective of their owners, causing them to see other dogs as a threat.

There are a number of ways you can improve your Rottie's behaviour towards other dogs, which I will explain below.

As I mentioned before, it is best to socialise your Rottweiler puppy before the age of 16 weeks (4 months). You should introduce them to different people, places, dogs and animals. You should also make sure to introduce them to a variety of age-groups (adults, puppies, older dogs, children, elderly, etc.)

You can still socialise an older dog (such as a rescue dog), but this is much harder and takes persistence. You need to be an incredibly disciplined owner to ensure all bad behaviour is corrected and good behaviour is rewarded. This ensures clear boundaries set.

Older dogs may also at times revert back to bad behaviours they learned as a puppy (before you adopted them), so you need to be more careful around others. You will find ways you can socialise your Rottweiler at the end of this article.

As a general rule, female dogs are better at socialising than male dogs. This is true with most animals (and people too!). If you want to make things as easy as possible, you should adopt a female Rottweiler puppy.

It is widely known that desexing a dog reduces undesirable traits such as aggression or antisocial behaviour. This is true for both males and females. It is the sex hormones that can make a Rottweiler feel more threatened or sensitive.

However, it is very important to understand that desexing can also have a negative impact on your Rottweiler's health. Desexing too early has been shown to increase a dog's risk of joint-related conditions. You can learn more about the effects of desexing here.

To help counteract these effects, you may want to consider desexing your Rottweiler once they are fully grown (around 2 years old). Just keep in mind that this runs the risk of puppies if you have two dogs of the opposite gender.

If you are trying to decide whether or not to bring another dog into the home, I think you will find that your Rottweiler will appreciate the extra company when you are away.

In this instance, you can use age to your advantage. Having at least 2 years between your Rottweiler and another dog will help eliminate any question of dominance. This age gap helps the Rottweiler understand who is in charge so there is no fighting for the Alpha role, which is common with dogs of similar ages.

Dogs of the Opposite Gender

Having a dog of the opposite gender to your Rottweiler should help them get along more easily. Dogs of the same gender tend to be less tolerant of one another and fight more often. Obviously this is something that you cannot control at a dog park.

Are Rottweilers Safe Around Small Dogs?

As with any other sized dog, Rottweilers can learn to socialise with smaller dogs if introduced to them at a young age and if they are taught to be gentle.

However, smaller dogs have a tendency to be quite aggressive towards bigger dogs due to 'little dog syndrome'. Because they feel threatened, they may growl, chase or nip at your Rottweiler.

A small dog that is trained well is not likely to have these tendencies. However, many small dog owners use their dog's size as an excuse not to train them. This is why it is important that you, as a responsible dog-owner, raise your Rottweiler to treat all dogs safely.

How Can You Help?

A Rottweiler will be more inclined to socialise safely with small dogs if they have a smaller dog in the home. Having a smaller dog to play with will teach your Rottweiler how to be gentle and also desensitise them.

Again, you must socialise your Rottweiler as a puppy with smaller dog breeds so that they become used to them.

Where to Socialise Your Rottweiler

Regardless of whether or not your Rottweiler is a puppy, the fact that you are committed to socialising them will benefit them greatly. Below are a number of places you can socialise your Rottie with other dogs (and people too!).

If you invest in taking your Rottweiler with your wherever you go (at least as a puppy), they will acclimatise much quicker to the world around them and be more friendly around other dogs and people. They will also love all the time they get to spend with you! Whether you have heard of them or witnessed them in your own Rottie, zoomies are a funny little quirk we see in our dogs. Sometimes they seem random, other times you might notice a pattern to this behavior. In this article, I will explore exactly what the zoomies are and 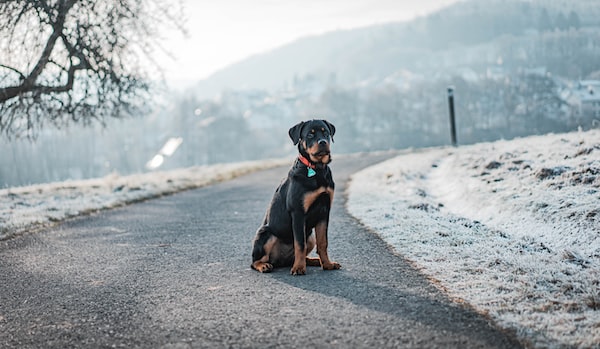 We've all been there before with a stubborn dog. You say the command and they just stare at you or refuse to listen. Rottweilers seem to have made a bit of a name for themselves with their stubborn ways, which is why it is important to understand why they behave

After rugging-up all winter, the time comes to strip off the layers and prepare for summer. This includes preparing your Rottweiler to keep cool in the hot weather. If you need some ideas to get you through the next summer season, this article will give you a number to choose

I Consent Do not track